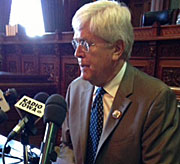 A University of Northern Iowa political science professor says the power of incumbency is definitely helping Republican Terry Branstad’s bid for a sixth term, but UNI’s Christopher Larimer says Branstad’s status as an incumbent means the race isn’t getting as much attention in 2014.

“I think the gubernatorial race is kind of losing out just because it’s not competitive. You know you have the Ernst/Braley race. Then in the first district you have Murphy and Blum and in the third district you have Appel and Young and even in the fourth and second district there’s competition there,” Larimer says. “The gubernatorial race is the one where we pretty much know what the outcome is going to be.”

Democratic challenger Jack Hatch hasn’t raised much money and had to pull his TV advertising off the air a few weeks ago. Hatch is back on the air with a closing ad this week that emphasizes the message that it’s time for a “fresh start.” 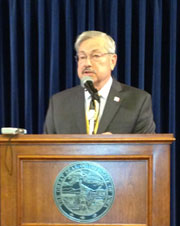 Larimer says that’s a hard argument to make. “Simply because you’re asking Iowans to ignore some of the positive economic things going on in the state, ignore the fact that well over 50-percent if not two-thirds of Iowans think the state is on the right track, so why should we change course?” Larimer said. “I mean Iowans tend to like incumbents generally.”

Larimer recently analyzed Branstad’s 2010 race which was a battle of two incumbents. “Incumbent governors in Iowa, there’s been a pretty long tradition of them staying in office, really, for as long as they want, with the exception of Governor Culver,” Larimer says. “And I think a lot of it comes down to two things: do Iowans connect with the governor and do they feel comfortable with the governor?”

Branstad has served almost three decade inside the statehouse, first as a state representative, then as lieutenant governor and, for almost 20 years, as governor. Polls have consistently shown Branstad leading Hatch by double-digits.