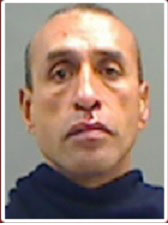 Council Bluffs police say a man who was dressed as a woman tried to kidnap a young woman at knifepoint on Tuesday in a Walmart parking lot. Police Sergeant Chad Meyers says the 19-year-old woman had just gotten out of her car and was heading for the store. “When she got near the door, this man wrapped one arm around her and pressed a knife up to her thigh area and tried forcing her back into her own car,” according to Meyers.

The unidentified woman was able to break free from the attacker’s clutches and screamed for help. “Two people who actually witnessed this happen had followed the man and detained him,” Meyers says. “He was subsequently arrested for robbery in the first-degree and kidnapping in the second-degree.” The suspect is identified as 53-year-old Jose Gusman.

Meyers says Gusman had been dressed in women’s clothing at the time of the incident.