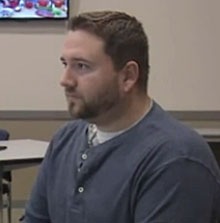 The man who used his phone to record a Dubuque school vehicle speeding on Interstate 380 is out of a job. Jay Shipley of Solon says his employer, TruGreen, fired him for recording the incident while driving a company vehicle. While traveling to a landscaping job on October 21, Shipley spotted the Dubuque Schools cargo van with five students on board.

He told KCRG-TV that the van was traveling up to 90 miles-an-hour. The video shows the speedometer on Shipley’s vehicle was at just over 80 miles-an-hour as he pulled up alongside the van. “What caught my attention is I’m a father of a 7-year-old and when I saw that I immediately thought of my 7-year-old,” Shipley said.

He said he first called 911. Then, he started recording video and posted it to Facebook. Two days later, TruGreen suspended him. He was fired Tuesday. Shipley admits driving while recording video was dangerous, but he believes the company’s policy should not restrict employees from doing what they believe is right.

“If I didn’t do it, nobody was going to do it,” Shipley said. “If this goes unnoticed and uncontrolled, then it’s everybody turning their head and nobody taking action.” TruGreen officials told KCRG its policy is to always follow federal, state and local laws. That includes prohibitions against speeding and cellphone use while driving.

Shipley thinks his firing was unjust and he wouldn’t change a thing. “I’d do it 1,000 times over,” Shipley said. “If it could save one child, I would do it time and time again.” The Dubuque Community School District is not saying if the van driver has been disciplined.