You are here: Home / Education / Website ranks UNI high for affordability and being ‘eco-friendly’ 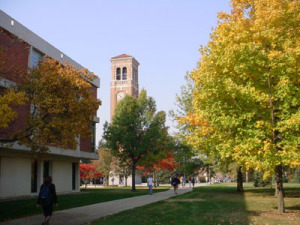 The University of Northern Iowa likes to say its students are “Purple for Life” in reference to the school’s colors, but a new survey credits the Cedar Falls campus for being green.

UNI sustainability coordinator, Eric O’Brien, says the ranking is recognition of the things they’ve done to save energy. “There’s a lot of work that we try to do as far as reducing our energy load to campus. We’ve invested consistently in trying to get more energy-efficient systems, upgrading some of our systems that in many cases were decades old,” O’Brien says.

One easily recognized example is updating the lights in the UNI-Dome — the campus stadium that has hosted hundreds of college and high school sporting events and championships. “They were original lights from the 1970’s when the structure was put in. And just those upgrades in lights saves us over 20-thousand dollars a year in electrical bills,” O’Brien explains. “So, there’s some amazing impacts that we can do just through some minor changes that the people using the facilities don’t necessarily know.”

O’Brien says they also do a lot of planning to get the most efficient new buildings on campus. “Anytime we’re doing new buildings or major renovation, there are considerations that are taken for everything as far as how efficient that building runs,” O’Brien says. “Whether it’s how we take out waste to how we use energy, to how we’re using the space right around it. To make sure that it’s a building that can last, it’s a building that can use the least amount of energy we need it to use and still be very comfortable for the occupant.”

The university has a variety of programs to get students involved, including the creation of a bicycle exchange program. “Getting people to donate old, unworking bikes, and we’re fixing them up trying to get those back in the hands of our students who don’t necessarily have a bike — kind of a bike share program,” O’Brien says.

Another project that is in the works right now is revamping the entire system for handling waste on campus. “Trying to get more and more recycling options on campus — because it costs us pennies on the dollar to recycle material — compared to taking it to the landfill,” O’Brien says, “when we now that almost 60-percent of the material in our waste stream could be recycled if we would be able to do that. It’s and area that can save us a lot of money if we would be able to do that.”

O’Brien says education is one of the keys to implementing the changes in the waste stream, so that everyone on campus knows how to properly recycle material. The website says UNI’s on-campus organization called c.a.r.e. (creating a responsible environment) promotes eco-friendliness and sustainable living through a number of on-campus initiatives.

The top two schools on the list ahead of UNI were Berea College in Kentucky at number one, and Lincoln University in Jefferson City, Missouri. Iowa State University was the only other Iowa school on the list, coming in at number 12.