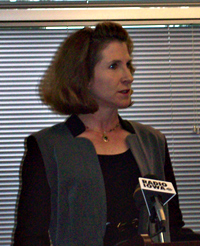 The woman who has been state auditor for the past 17 months is now running to be elected to the job. Republican Mary Mosiman was appointed to the post last year by the governor when the previous auditor resigned to take another job.

“Iowans deserve to have a qualified professional, a Certified Public Accountant, at the helm of this constitutional office — the state auditor’s office,” Mosiman says.

Mosiman is a CPA. She says if her opponent, who is not a CPA, were to win, the state auditor’s office would find it difficult to hire and retrain CPAs, because CPAs want to work in a CPA firm to maintain their credentials.

“The financial statement audits that most every government entity is required to have does need to be done by a licensed CPA,” Mosiman says. “So if the state auditor’s office is not CPA firm and CPAs don’t work in the state auditor’s office, then that would impact how our different government entities — our counties, our cities and even our state agencies — are able to get their annual audit work conducted.”

Jon Neiderbach, a lawyer from Des Moines, is the Democrat who’s challenging Mosiman. 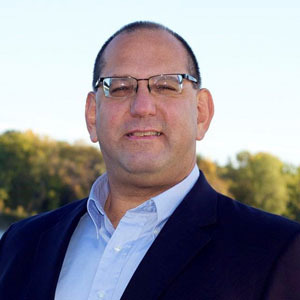 “Iowa taxpayers need a state auditor who knows the job is more than just being a bookkeeper,” Neiderbach says. “We need someone who’s passionate about saving money and improving services.”

And Neiderbach says there’s no legal requirement that the state auditor be a CPA.

“Nebraska and Missouri don’t have CPAs. There is a CPA state auditor in Illinois, but I’m not sure their finances are doing so well,” Neiderbach says. “It’s just really a bogus argument to try to distract from the core issue and that is we need a state auditor who actually does all the job according to state law and what taxpayers want.”

For example, Neiderbach says the state auditor should have taken a lead role in the current review of the state universities.

“Iowa law talks about how on an ongoing basis the auditor should be looking at efficiency and effectiveness issues,” Neiderbach says. “If that was happening, as it will when I’m state auditor, you wouldn’t need to hire an outside firm for $3.5 million.”

In the year and a half that Mosiman has been auditor, she and her staff have issued reports on over 20 cases of fraud in local government entities. Mosiman says she has developed a check list for the officials who are supposed to be overseeing a variety of units of government, from libraries to soil and water conservation districts, that are not required to have yearly audits.

“Simple ways of establishing checks and balances so hopefully fraud can be reduced and even prevented in these entities,” Mosiman says.

Mosiman was elected Story County’s Auditor three times and was a top deputy to Secretary of State Matt Schultz before becoming state auditor. Neiderbach faults Mosiman for failing to blow the whistle on problems in the secretary of state’s office.

“We need a state auditor who isn’t afraid to dig in order to improve services,” Neiderbach says. “Mary Mosiman, when she was in the secretary of state’s office, was silent about a lot of things.”

A few workers in the secretary of state’s office, for example, were being paid, but weren’t coming in to work and Mosiman says she “frequently” aired concerns about the situation to Schultz.

“We knew that was not appropriate,” Mosiman says. “It was communicated, but ultimately I was not the decision maker in that situation.”

Mosiman also repaid the state about $2,500 for the miscalculation of vacation time accrued during her work in the secretary of state’s office.

Neiderbach worked as a non-partisan financial analyst for legislature for 15 years and as a management analyst for the Iowa Department of Human Services for another 15 years. He also served one term on the Des Moines School Board.