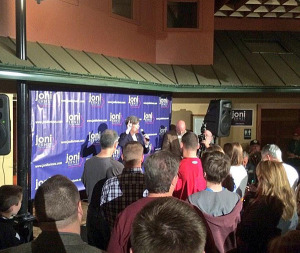 Republican U.S. Senate candidate Joni Ernst wrapped up her 99 county tour Thursday night. She made 112 campaign stops in the past 39 days and held a rally with a crowd of supporters in an Ames brew pub last night.

Grassley spoke briefly, just before Ernst, and told the crowd there’s “building enthusiasm” for Ernst as “the polls spread to her advantage.”

“She’s on FOX News more than a sitting senator is,” Grassley said, and the crowd laughed, “so that tells you something as well.”

Congressman Tom Latham of Clive also campaigned with Ernst yesterday (Thursday) as she made stops in his congressional district.

“Let me just say that probably the happiest guy in the country today is Jimmy Carter,” Latham told the crowd in Ames last night, “because Barack Obama is making him look competent.”

Ernst is sounding a confident theme, not talking about “if” she’s elected, but “when” she becomes a U.S. Senator.

Ernst will campaign through the weekend with Republican Governor Terry Branstad and other Republican candidates for statewide office. On Saturday, former President Bill Clinton will hold a get-out-the-vote rally in Des Moines for Democratic candidate Bruce Braley and then Clinton will headline a Braley fundraiser Saturday evening in Waterloo.