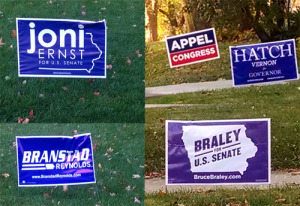 Political signs in yards across Iowa tout the various candidates.

Iowa State University political science professor Dave Andersen explains. “I’m new to Iowa and I grew up in New Jersey and in the northeast, where I’m used to seeing states track to one party or the other and Iowa is unique that you can have the same electorate look at the governor’s race and say by a 20-point margin, ‘We are going to keep our incumbent governor,’ and then look at the senate race and say , ‘We’re really not decided.'”

Whatever the outcome of Tuesday’s election, Anderson says Iowa will still be “purple all the way” and considered a toss-up for either party in the 2016 presidential election.

“I think Iowans are able to uniquely able to kind of move back and forth between the parties, as an aggregate and I think they listen to both sides,” Andersen says. “Iowan voters, as a whole, I don’t think have chosen on party over another. I think they are able to make a distinction race by race, candidate by candidate.”

“It’s a competitive state,” Budzisz says. “…Senator Ernst, if you look at the polling averages, is up roughly two percent and then the same electorate is choosing Governor Branstad by 20 percent. There’s incumbency in that, but there is also an element to the state itself as a balanced state.”

Budzisz and Andersen made their comments during taping of the “Iowa Press” program that airs tonight on Iowa Public Television.