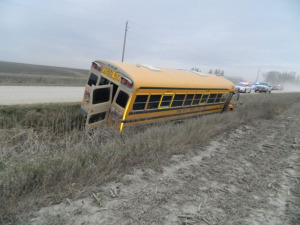 This West Union school bus was involved in an accident with a manure spreader.

A school bus collided with a tractor that was pulling a manure spreader in northeast Iowa’s Fayette County. The accident happened just before 4:30 p.m. Thursday west of West Union, near the intersection of O Avenue and 220th Street.

A tractor driven by 55-year-old Brent Mitchell of Hawkeye was in the process of making a wide turn into a field drive when a North Fayette Community School bus, driven by 50-year-old Caroline Bemiss of West Union, failed to yield and side-swiped the tractor before it entered the driveway.

The bus entered a ditch. There were four students on board and all were taken by ambulance to a hospital in West Union for treatment of minor injuries.

The accident still remains under investigation. 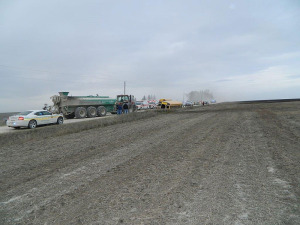 Rescue vehicles on the scene of the bus crash.