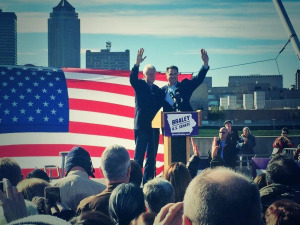 Former President Bill Clinton rallied with about 600 Democrats in Des Moines this afternoon, calling U.S. Senate candidate Bruce Braley the “grow together, work together” candidate in the race.

“She has said she would have voted against the Farm Bill,” Clinton said. “That’s not a ‘work together’ and it’s not even a Republican position. It may be in Tea Party heaven, but it’s not in the world that you live in in Washington.”

Clinton said he “kinda liked” Ernst’s first campaign ad, when she talked about castrating pigs while growing up on a southwest Iowa farm.

“I was thinking about when his opponent ran that ad at the beginning of the campaign and then she said she wanted to take her pork-cutting skills to Washington and make ’em squeal,” Clinton said. “Now, that sounds good, but in order for it to work, you’ve got to know the difference between pork and people.”

Musician James Taylor performed briefly for the crowd, playing a couple of tunes, spreading a “get out the vote” message and railing against the outside groups which have spent millions running ads against Braley.

Braley, who spoke right after Taylor, borrowed one of the lines from some of the singer’s greatest hits to make his points with the crowd.

“When you’re down a troubled and you need a helping hand and nothing is going right, all you have to do is call and, as your senator, I’ll be there,” Braley said, to cheers from the crowd.

Braley and the former president are heading to Waterloo this evening for a Braley campaign fundraiser. Ernst is campaigning today (Saturday) with Governor Terry Branstad and other Republican candidates on the statewide ticket.