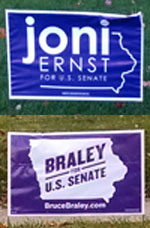 It may be the final public opinion poll released before Election Day and it shows Iowa’s U.S. Senate race as a “dead heat.” The Quinnipiac University poll shows both Republican Joni Ernst and Democrat Bruce Braley knotted up at 47 percent each.

“This is the end of a long campaign. It’s been very close all the way,” says Peter Brown, assistant director of the Quinnipiac Poll. “Fittingly, it’s a dead heat entering the last 36 hours of the campaign.”

According to the survey, Braley leads 56 to 36 percent among those who already have voted.

“But that’s not necessarily surprising. Even in earlier Quinnipiac Polls when Ms. Ernst was ahead, Braley still led among those who had already voted, ” Brown says. “The question of can Ms. Ernst overtake that presumed lead among early voters on Election Day is, obviously, the $64,000 question.”

Republicans have historically had a higher turn-out on Election Day, while Democrats had held an advantage in early voting. The latest data indicates the two political parties are nearly even on the number of early votes cast from people who identify as Democrats and Republicans. The Quinnipiac Poll, though, offers a snapshot of how independent voters who’ve already cast their ballot are voting, and they seem to be tilting toward Braley.

The Quinnipiac Poll differs significantly from The Des Moines Register “Iowa Poll” released Saturday night which showed Ernst seven points ahead of Braley. Democrat immediately called that poll an “outlier” as no other poll released in the past week showed either candidate with that much of an edge.

The new Quinnipiac Poll also took a snapshot of the governor’s race and found Democratic challenger Jack Hatch “inching” closer to long-time Republican Governor Terry Branstad. Branstad holds an 11-point lead in this latest poll, compared to the Quinnipiac Poll from last week which showed Branstad with a 19-point lead.

“Mr. Branstad may not win as large a landslide as it might have appeared earlier, but he’s going to win — almost certainly,” Brown says. “The big question for Mr. Branstad is has his campaigning and the Republican unity effort to help all Republican candidates, with him at the top of the ticket, will that be worth enough votes to help Ms. Ernst inch her way across the finish line first or not.”

The Quinnipiac University Poll was conducted last Tuesday through yesterday and the survey has a margin of error of 3.5 percent.