You are here: Home / News / Hatch to supporters: “your fight has just begun” 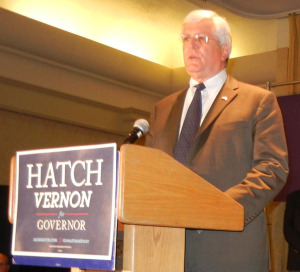 Democratic candidate for governor, Jack Hatch, conceded the race to incumbent Terry Branstad not long after polls closed at 9 p.m.

Hatch spoke to his supporters in downtown Des Moines a short time later. “I did call the governor. I did congratulate him on his victory,” Hatch said. “There are a lot of people out there (who) feel disappointed. I just want to say to you, it’s now your time to step up.”

Hatch, a state senator from Des Moines, encouraged Democrats to keep fighting for the policies they believe in and keep challenging Branstad and Republican legislators. “Ask them to give you more, ask them to reach out farther, ask them to do what you wanted in this election that we have not done,” Hatch said. “Our fight has not stopped, but more importantly, your fight has now just begun.”

Branstad, who will turn 68-years-old on November 17, will be sworn into an unprecedented sixth term in office in January.