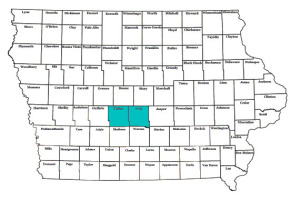 Iowa’s largest county and the state’s fastest-growing county are key battlegrounds in the race for Iowa’s U.S. Senate seat.

Polk County, home to the state’s capital city of Des Moines, is Iowa’s largest county and a key point of emphasis for Bruce Braley’s campaign because it is a Democratic stronghold. Former Governor Tom Vilsack said back in 2004, John Kerry lost Iowa to George Bush because Kerry didn’t win enough votes in Polk County.

As of midday Money, a record number of absentee ballots had been returned in Polk County — over 58,000. Nearly 29,000 came from Democrats, another 10,000 from independents and Democrats contend many of those are likely Braley voters.

For Republicans, Dallas County has become a GOP stronghold. Dallas County was the seventh-fastest growing county in the entire country in 2012. It’s population grew by 62 percent in the first decade of this century. Jon McAvoy has served on the Adel City Council for 25 years and was featured in an ad for Republican Joni Ernst’s campaign.

“I think Dallas County is going to carry strongly for Joni, I really do. We’re strongly Republicans,” McAvoy said recently during an interview with Radio Iowa. “When we moved out there 36 years ago, it was pretty much all Democrat. All the elected people in the county, except for one, were Democrats and now it’s totally flipped around and they’re all Republicans, except for one.”

As of Saturday, Republicans had a 3000 vote edge in returned absentee ballots in Dallas County.