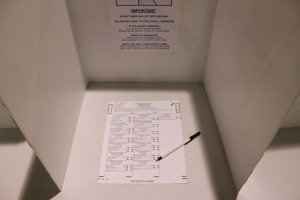 County election officials are swamped today with calls and Election Day activity, but it’s unclear whether voter turnout is heavier than normal or just normal for a mid-term election.

“So it’ll be a true a test if this early voting were any new people coming into the system, or if it’s just people who would have voted anyway,” Moritz says.

According to Moritz, turnout through midday was “normal” in the Quad Cities and the surrounding area. Other auditors like Dubuque County Auditor Denise Dolan say they’re being inundated with calls from people who don’t know where to vote.

“Most of my polling sites are telling me that they’ve got a normal turnout. They’re not telling me it’s really heavy,” Dolan says. “Half the phone calls we’re getting are from people who don’t know where to go to vote today.”

Carolyn Stender works in the Pottawattamie County Auditor’s office and she says election officials are scrambling to help those who asked for an absentee ballot, but didn’t send it in and have shown up at the polls today to vote.

“A lot of the ballots, people didn’t either receive them or lost them and that’s adding a lot of extra work,” Stender says.

Allamakee County in far northeast Iowa is considered a sort of “bellweather” county. Denise Beyer was elected county auditor in Allamakee County two years ago, so this is the first election she’s managing.

“Every precinct I’ve spoken with has been very busy all day,” Beyer says. “We’ve had 2500 absentee voters out of a little over 10,000 registered voters — so 25 percent just in absentee, plus very busy polls today.”

Many county auditors were out checking precincts in person this afternoon to gauge turnout and will check in with Radio Iowa early this evening to report on turnout in their areas.