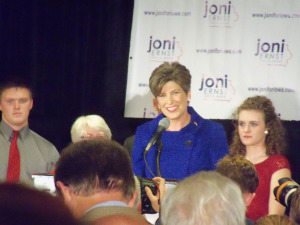 Joni Ernst speaks to supporters after becoming the first woman to win a U.S. Senate race in Iowa.

It was an historic win in the race for the U.S. Senate in Iowa Tuesday. Republican Joni Ernst of Red Oak defeated Democrat Congressman Bruce Braley of Waterloo to become the first Iowa woman elected senator. “Oh my goodness, thank you Iowa,” Ernst said in greeting her supporters at Republican election headquarters in West Des Moines.

It was a hard-fought race with millions of dollars spent and Ernst acknowledge Braley’s effort. “I congratulated him on running a phenomenal campaign. He was a worthy opponent, he was a worthy opponent and he was willing to sacrifice for what he thought was right. We didn’t agree on much,” Ernst said and the crowd laughed. “But I do admire anyone who is willing to stand up and fight for what they believe in.” She also told those who voted for Braley that she would work to earn their trust.

Ernst came out of a crowded field in the Republican primary after running an add that talked about castrating pigs. A Lieutenant Colonel in the Iowa National Guard and State Senator, she kept the momentum going through election day. “We’ll Iowa, well Iowa, we did it,” Ernst said to cheers. 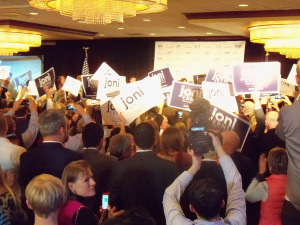 Supporters of Republican Joni Ernst hold up signs as they wait for her victor speech.

Ernst finished her speech by crediting her grandparents and others for working in the fields of Iowa and dreaming of a better life for their children. “They gave an ordinary Iowan extraordinary opportunities. Opportunities that they could only dream of. And in the Senate, that’s the kind of America that I am going to fight for every single day. Every single day,” Ernst said.