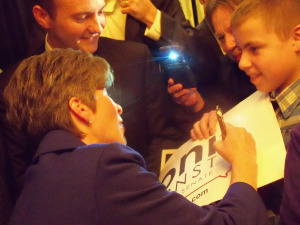 Joni Ernst was in big demand for photos and autographs after her Tuesday win.

U.S. Senator-elect Joni Ernst today said the results of Tuesday’s election show the country is ready for a “different direction.”

Ernst’s win along with other Republican victories last night secured a majority of seats in the U.S. Senate for the GOP and swept Democrats out of majority control for the first time in eight years.

“We’ll work together as colleagues, figure out what our priorities are,” Ernst said, offering a list that included a “balanced budget — really watch our spending at the federal level, the Keystone pipeline will probably be a big topic that we’ll discuss in January as well as, of course for me, a strong national defense is a priority.”

Ernst had a celebratory lunch with campaign staff and her family today, before heading off Thursday and Friday for military duty. She is a lieutenant colonel in the Iowa National Guard.

“I’m assigned to Joint Forces Headquarters now, so will be going up there just doing my normal duties throughout the day, working with one of my bosses up there and then the rest of the weekend, just family time,” Ernst said. 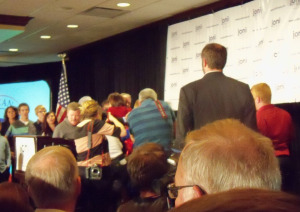 Next week Ernst will go to Washington, D.C. for orientation sessions scheduled for new members of the senate. She has told senate leaders that she hopes to serve on the Agriculture and Armed Services Committees.

Through the course of the campaign, Ernst has been mentored by a couple of women who’re already serving in the U.S. Senate and Ernst said she will be able to work in a “bipartisan spirit” on a number of issues with her future female colleagues.

“Really, I think all of the females that serve in the United States Senate work very well together, regardless of party,” Ernst said.

Ernst has also talked with both of Iowa’s senators, Republican Chuck Grassley and Democrat Tom Harkin. The recent dust-up over a comment Harkin made, comparing Ernst to Taylor Swift and Mr. Rogers, appears to be old news today.

“Senator Harkin called last night, was very gracious and offered his assistance if there was anything that he could help with through the transition,” Ernst said. “I look forward to visiting with him when I head out to Washington, D.C. next week. I appreciated his call very much.”

Ernst spent time with Grassley after she had been declared the winner last night.

“He was so very excited,” Ernst said, with a laugh. “Both Senator Grassley and Barbara Grassley were overwhelmed, just very, truly excited about having a partner to work with in the United States Senate and I look forward to working with him.”

This evening Ernst plans to attend a high school volleyball game in Greenfield to cheer on the team from Stanton, where her 16-year-old daughter goes to high school. Ernst is also a Stanton grad.