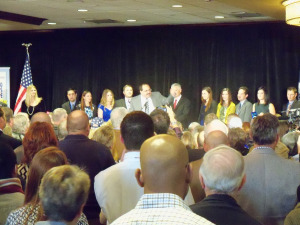 Over 1.1 million Iowans voted in the 2014 General Election. Read more about the turn-out here.

Iowa Governor Terry Branstad easily won reelection to a sixth term and will become the nation’s longest-serving governor ever.  Listen to Branstad’s victory speech.  Jack Hatch, the Democrat who challenged Branstad’s bid for reelection, spoke to supporters shortly after the polls closed.

Republicans won three of Iowa’s four congressional seats.  Congressmen Steve King and Dave Loeback, as well as Congressmen-elect David Young and Rod Blum, all spoke with Radio Iowa on Election Night to talk about their victories. Jim Mowrer, the Democrat who ran against Steve King, addressed speculation that he may run against U.S. Senate Chuck Grassley in 2016.  Read about the congressional races here. 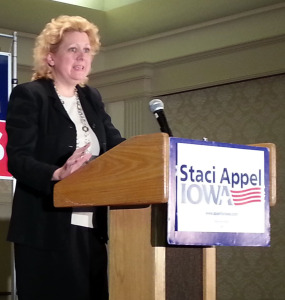 Staci Appel talks with supporters after losing her race for the U.S. House.

Incumbents won in each of the races for state ag secretary, state treasurer, state attorney general, state auditor and secretary of state.  Read more about those results here, along with the news that Democrats held onto their slim two-seat edge in the Iowa Senate, while Republicans gained four seats in the Iowa House to up their majority to 57 of the 100 seats there.