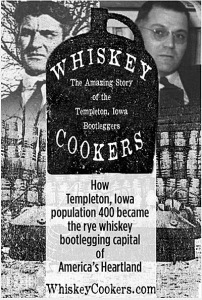 An 8-day film festival opens in central Iowa tonight featuring movies and movie makers from Iowa and around the globe. Kimberly Busbee, co-founder of the Wild Rose Independent Film Festival, says they’ve carefully selected the best movies for the fest from more than 500 submissions from close by and far away. “It has 66 films this year, a huge number,” Busbee says. “Sixteen of them are features, ten are international, 14 are from Iowa, several more with Iowa ties.”

In addition to the large number of films, there’s also a wide array of film types in the line-up. Busbee says, “The films range from features to shorts, documentaries, animated films, student films and music videos.” Templeton Rye has been in the news a great deal in recent weeks, and that liquor is the subject of a documentary called, “Whiskey Cookers: The Amazing Story of the Bootleggers of Templeton, Iowa.”

“‘Whiskey Cookers’ is a great story, it’s a documentary film about the real story behind the Templeton Rye bootlegging in Iowa,” Busbee says. “It’s based on never-before-seen documents from the national archives, federal court filings, newspaper articles, photos, newsreels, lots of great music.” Hollywood director John Putch, known for shows like “Cougar Town,” “Scrubs” and “Ugly Betty,” will be teaching two workshops at this year’s festival, one on independent filmmaking and the other on auditioning for actors.

The 12th annual festival runs through November 13th at the Fleur Cinema and Cafe in Des Moines. Learn more at: www.wildrosefilmfest.com