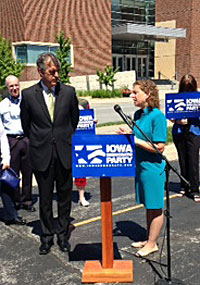 A year ago, Iowa Democrats were confident Bruce Braley would win Tom Harkin’s U.S. Senate seat and that the seat Braley was leaving to run for the Senate would stay in Democratic hands. Now, Democrats are assessing the Republican tide that swept through Iowa on Election Night and Iowa Democratic Party chairman Scott Brennan is blunt.

“We got it, loud and clear, that we need to do a better job of engaging folks and making them understand why they should have voted for our Democratic candidates,” Brennan told Radio Iowa during an interview on Thursday.

University of Northern Iowa political science professor Christopher Larimer said despite the much-touted voter targeting that worked for President Obama here in 2012, the 2014 Iowa electorate looked almost the same as it did in 2010.

“2010, I think, should have made the Democrats very anxious going forward to 2014 about things they need to do to get different people to show up and they apparently didn’t get the memo or were just simply ineffective in what they were trying to do to get people out,” Larimer said.

“So you have $80-plus million being spent on the senate election and you still have, actually, fewer people showing up at the polls,” Larimer said.

Bruce Nesmith, a political science professor at Coe College in Cedar Rapids, said Democrats failed to reassure voters who are anxious about the economy.

“What Democrats lacked this year was a message other than ‘Republicans are evil. Don’t vote for them,'” Nesmith told Radio Iowa on Thursday.

Twenty-two-year-old Jane Lindeman is a senior at Coe College who’s majoring in political science and, while she voted, most of her fellow students didn’t. Only 12 percent of those who voted in Iowa’s U.S. Senate race were below the age of 30.

Exit polls show 37 percent of those who voted in Iowa’s Senate race were Republicans, just under a third were Democrats and Senator-elect Joni Ernst, the Republican candidate, decisively won the battle for independents. Brennan, the Iowa Democratic Party chairman, said managers of the party’s get-out-the-vote efforts are analyzing the election data.

“They’ll be, in the next couple of days, producing sort of exit memos with what they believe worked, what didn’t work and then we’ll start the hard process of assessing,” Brennan said. “Although it seems to me that there was a prevailing national mood that was not in our favor at least as evidenced by the election returns everywhere.”

Brennan was drafted to be the party’s interim chairman in the summer of 2013 and he stayed on through the election. He does not plan to stay in the job for the next election, but there’s no date yet set for a party leadership election.

“It needs to be a thoughtful process as to what we’re going to do because the most important thing now is to reassess and start building for 2016 and actually making sure we put in fantastic Caucuses,” Brennan said.

If Democrats are successful in 2016 in sending another Democrat to the White House, Larimer suggested 2018 will be just as difficult for Democrats if they don’t figure out how to turnout voters when there’s no presidential campaign as motivation.

Sixty-five percent of the Iowans who voted in the 2014 election said the country is “seriously off on the wrong track” and a whopping 79 percent said they are worried about what may happen to the economy in 2015.