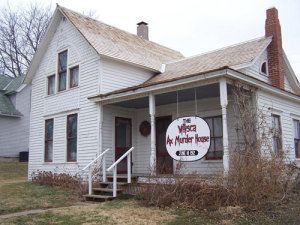 House in Villisca where an entire family was murdered in 1912.

The southwest Iowa house that’s served as an attraction for ghost hunters since a mass murder there in 1912 was the site of a stabbing early this morning.

Authorities says a Wisconsin man, who was visiting the Villisca Axe Murder house as part of a recreational paranormal investigation, stabbed himself around 12:45 A.M.

Robert Steven Laursen, Junior, of Rhinelander, Wisconsin, was transported to the hospital in Clarinda before being flown to a trauma center in Omaha. A report on his condition is currently not available.

Officials say since there was no indication of foul play, it’s unlikely charges will be filed. Six children and two adults were murdered in the house just over a century ago in a crime that was never solved.