You are here: Home / Business / Dahl’s Foods files for bankruptcy 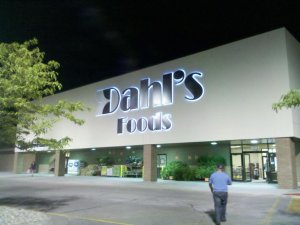 An Iowa-based grocery store chain has filed for Chapter 11 bankruptcy. Dahl’s Foods was founded in Des Moines in 1931 and grew to include more than a dozen grocery stores serving the Des Moines metro area and Ames. Earlier this year, the company announced the closing of stores in West Des Moines, Ames, and Ankeny.

A news release from Dahl’s states the bankruptcy filing will not affect the operations of the stores that remain open. A Kansas City company has agreed to buy Dahl’s operating assets. Associated Wholesale Grocers is a member-owned wholesale grocery cooperative serving over 3,000 retail member stores nationwide.

Des Moines, Iowa (November 10, 2014) – Dahl’s Foods announced today that it has filed a voluntary Chapter 11 petition for reorganization in Des Moines. Chapter 11 provides a process by which companies can reorganize and obtain necessary financing to complete a restructuring of its business while continuing regular business operations.
This process does not affect Dahl’s store operations – all Dahl’s locations will continue to operate as normal during this process.
“As we continue to seek the capital needed to maintain a competitive position within the communities Dahl’s serves, this is the best course of action,” said CEO Craig Moore. “Our board has approved the sale of the company, which will ensure that the stores come out of this stage successfully. Right now, our focus is on preserving our workforce and continuing to provide a competitive and connected store experience for customers.”
Associated Wholesale Grocers, Inc. (AWG) has entered into an agreement with Dahl’s to buy the company’s operating assets. AWG is a member-owned wholesale grocery cooperative serving over 3,000 retail member stores nationwide.
Jerry Garland, President and CEO of the Kansas City-based AWG said: “Our intentions for entering into the agreement to purchase Dahl’s Foods are to provide an opportunity for a member of our cooperative to successfully enter the Des Moines grocery market, with some good locations, and to gain a strong and experienced workforce, which is already in the stores. The current team at Dahl’s had commenced rebuilding this chain and we believe they have a good plan but the financial position they found themselves in was just too big to overcome. We envision that once acquired, Craig Moore and the store teammates will be given additional and continued support, the stores will be remodeled and updated, and steps will be taken to build a new brand and identity for the Dahl’s stores, and ultimately the consumers of Des Moines can be provided with a better selection and value in locations which are familiar and staffed by friends and neighbors. We believe this overall plan will strongly position these AWG member stores to favorably compete in Des Moines.”
“With this plan in place, these stores will be able to operate from a better position than they have in recent times,” said Moore. “The board is confident this is the best decision to improve our competitive position and help the stores succeed.”