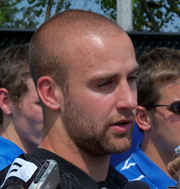 Former Iowa Hawkeye and New York Giant Tyler Sash has been fined after a scooter chase in May. According to court records, on October 29th, Sash plead guilty to public intoxication, a simple misdemeanor. A charge of interference with official acts was dropped in exchange for the plea. As a result of the plea, Sash was fined $65.

Sash was arrested on May 10th after leading police on a brief pursuit on his motorized scooter. During the chase, Sash dumped his scooter and ran into a wooded area. He was later tased by police after he resisted arrest. Sash was a member of the Iowa Hawkeyes and then played for the New York Giants beginning in 2011 until he was cut in August 2013.