You are here: Home / News / Snow in the forecast for parts of Iowa 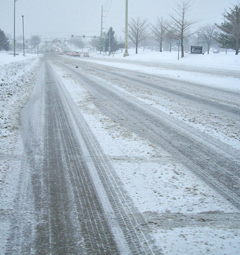 The National Weather Service says we could see some snow tonight.

It’s still “autumn” for another six weeks but it’ll feel — and look — a lot more like winter soon. Meteorologist Kevin Skow at the National Weather Service office in metro Des Moines, says temperatures will be falling after midday today and rain will be changing to snow for much of Iowa’s northern half tonight and into tomorrow.

“Thankfully, most of the snow is going to stay north of us into Minnesota,” Skow says. “It looks like parts of northern Iowa and even down here into central Iowa could see a bit of snow here in the next 12 to 24 hours.”

Forecasters say there won’t be enough snow to build a snowman, or hardly to even pat together a snowball, except perhaps in a few areas. “The bulk of the snow should remain across northern Iowa, up towards Mason City and Charles City, where an inch or maybe a little more than an inch is possible by Tuesday morning,” Skow says. “Down here towards Des Moines, we’re looking for a few tenths of an inch, more like a dusting. With ground temps still on the warmer side, most of that should just melt off.”

There have been no travel advisories issued though motorists are always encouraged to slow down when the roads are slick. “Pavement temps are really warm so it should melt on the roads and it might stick on the grass for a little bit but it should mostly melt off,” Skow says. “We do have cold air coming in behind it so that’ll help keep any snow on the ground, especially across the north.”

While some Iowa cities may see highs in the 50s today, the rest of the week will be much colder, with highs statewide in the 20s and 30s with lows in the teens and 20s.