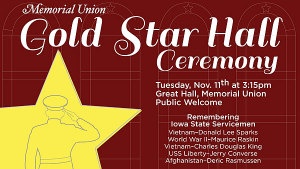 A ceremony will be held this afternoon at the Memorial Union at Iowa State University to honor five ISU students who died serving our country.

ISU spokeswoman Kristin Erdman says this is the 13th year for this Veterans Day event on the Ames campus. “The Memorial Union was founded in 1928 as a memorial to veterans, at that time, from World War One,” Erdman says. “The Gold Star Hall was created as a living memorial for these Iowa State students who fell during the time of war.”

The names of each of the student-veterans are engraved on the wall at the Union in a special place of honor. “The criteria for being a name on the Gold Star Hall wall is that these students had to have attended Iowa State fulltime at some point in their career,” Erdman says, “and they also had to have passed away during the theater of war during a time of wartime.”

While many Iowa State students have made the ultimate sacrifice, she says five were singled out for this year’s ceremony. “The first one that we’ll honor is Maurice Raskin, he’s from Woodbury, Iowa,” Erdman says. “He was a pre-veterinary medicine student in 1938 here at Iowa State. He was in World War Two and was killed in a mission over Italy in 1943.”

Others being honored include: Jerry L. Converse of Boone who was killed in 1967 aboard the U.S.S. Liberty off the shore of Egypt at the time of the Six Day War between Israel and Egypt. Charles Douglas King of Muscatine was a pararescueman during the Vietnam War who went missing in action in 1968 while attempting to rescue the body of a pilot in Laos. Donald Lee Sparks of Glidden was a 1968 ISU graduate initially listed as an MIA in South Vietnam in 1969. He was later declared a Prisoner of War and is believed to have died in captivity.

Deric Rasmussen of Storm Lake attended Iowa State between 1999 and 2002 was killed in Afghanistan last May 11th.