You are here: Home / News / Red Cross recommends an emergency kit for your car and home 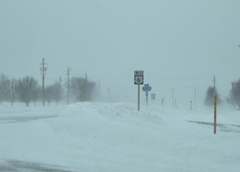 The Red Cross recommends you put an emergency kit in your car this winter.

The light snow and freezing temperatures Iowans are seeing should serve as something of a warning shot from Mother Nature to get properly prepared for the winter ahead. Liz Dorland, spokeswoman for the Red Cross chapter in Omaha/Council Bluffs, says all motorists across the state should have an emergency kit in their vehicle’s trunk or back seat.

The kit should include things like: a warm blanket, waterproof boots, socks, hats, gloves and sand or non-clumping kitty litter for extra traction should you get stuck. Dorland says you might also toss in a shovel. It’s a wise idea to have another emergency kit assembled for the house, in case you get snowed in.

The home emergency kit should include many of the same items that are in the vehicle’s kit. She says, “Make sure you have extra food, bottled water, flashlights, extra batteries, a battery-powered radio would be great to have.” Also, make sure to have a cell phone charger handy. While winter may still be six weeks away, Dorland says it’s a smart plan to be prepared well ahead of time.