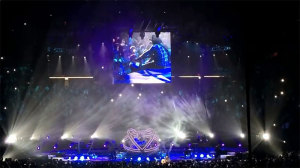 Shaw and Garth Brooks during the concert.

Last Friday night, it was Garth Brooks surprising Iowa native Teresa Shaw at his concert in Minneapolis, but on Tuesday, the roles reversed as the breast cancer patient from Osage surprised the country music legend on the national TV program “Entertainment Tonight.”

Shaw held up a sign at the concert that read: “Chemo This Morning, Garth Tonight, Enjoying ‘The Dance.‘“ She was helped by security to the front of the stage and once Brooks saw Shaw and her sign, as he was singing his song “The Dance” and came to the edge of the stage, giving her a hug, a kiss and his guitar.

The video of the exchange went viral and “Entertainment Tonight” decided to bring Shaw and Brooks together. Brooks says they were in the second of two shows that night and he was thinking about how tiring doing four shows in 24 hours was, but then he saw Shaw’s sign and thought about why he was complaining as it put everything into perspective. Brooks and Shaw sat down and talked about the concert experience.

Brooks said, “I pray for your health…my fear would be that you ever think I did it for any other reason other than…it was a nice moment.” Shaw said, “You’re just an amazing guy…the music helps me, the music has always helped me through situations and I love your music.”

Shaw was diagnosed with stage three breast cancer in June. She will have a double mastectomy followed by reconstructive surgery after the first of the year.