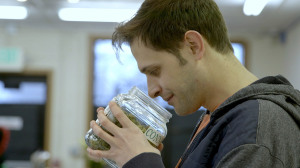 An Iowa native, now a longtime resident of Colorado, is getting paid to smoke marijuana and write about the experience. Shortly after the drug became legal in Colorado in January, the Denver Post hired Jake Browne to become the newspaper’s first pot critic.

Browne, who grew up in Cedar Rapids, says he never dreamed he’d land — what many of his friends and readers call — “the best job ever.” “I always thought I was going to be a lawyer and now I just hope I don’t need one,” Browne told Radio Iowa, laughing. After graduating from Metro High School in Cedar Rapids in 2001, Browne moved to Colorado and enrolled in college, but dropped out. He eventually became marketing director and general manager of a friend’s medical dispensary and opened a “pot consulting” business.

Browne was hired as the pot critic for Colorado’s oldest and largest newspaper after answering a Facebook ad. He’s since submitted more than two dozen reviews of various strains of weed. “Each different strain will have a unique structure, a unique smell, and it should have a certain flavor to it. You’re trying to identify those key components the same way you would identify birds in the wild,” Browne said.

The 31-year-old Browne claims he only smokes pot two or three times a week, sometimes less, and only takes a couple hits each time. “As I’ve started to get older, I use it more in the way you’d use a Swiss Army knife,” Browne explained. “So, if I need to smoke because I need something creative or I’m having a hard time going to sleep…but, really picking my spots and making sure that I’m fresh, so when I review something, I really get an idea how it will affect me.”

At least once a week, Browne visits the marijuana dispensaries in downtown Denver. He then samples some of the product and writes reviews, keeping in mind that many of his readers may be visiting Denver from out of state. “What I try and give them is an idea…if you come out here and you go to a shop at noon, if you buy a certain strain, it may put you to sleep by 2 p.m. By the same token, if you buy a strain and you’re out smoking late at night, it could keep you up,” Browne said. “The idea is there are a variety of different effects and you should know what you’re getting.”

The Denver Post now has two pot critics and plans to add more to write for the paper’s spinoff site, The Cannabist. The New York Times recently featured Browne in a profile piece, calling him “the nation’s first marijuana critic.”