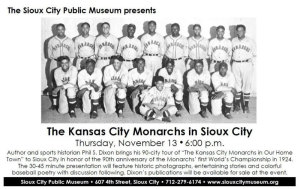 An author who’s visiting American cities that hosted the best team in Negro Leagues Baseball will be in northwest Iowa tonight. Theresa Weaver-Basye of the Sioux City Public Museum says Phil Dixon has written a book to mark the 90th anniversary of the Kansas City Monarchs first championship in 1924.

“He’s going to 90 cities around the United States,” she says. “…Sioux City was one of the places that the Monarchs played.”

The Monarchs were a charter member of the Negro National League and they won the first Negro League World Series, in 1924. The Kansas City Monarchs played an exhibition game in Sioux City while on a barnstorming tour of the country — something Weaver-Basye didn’t know about.

“That’s what I love about history, that there’s always something new to learn,” she says. “It’s fantastic when somebody else comes and wants to tell you about some of the history right in your neighborhood, in your backyard.”

It wasn’t easy for the team to travel during the days of segregation.

“You had to figure out what restaurants you could go to and maybe you couldn’t go on the train, so they used their own vehicles,” Weaver-Basye says. “…It was complicated and difficult and I’m sure he’ll share some of that.”

The author and sports historian will give a half-hour presentation tonight at the Sioux City Public Museum and then he’ll take questions from the audience. Dixon has written nine books about Negro Leagues baseball. He is a co-founder of the Negro Leagues Baseball Museum in Kansas City.

Exhibition games were organized between the Negro Leagues stars and Major League Baseball stars in the 1920s, ’30s and ’40s. According to the Negro Leagues Baseball Museum, the most famous series of exhibition games was played in 1946 between an all-star team of Negro Leagues players led by Satchel Paige and a Major League all-stars team led by Iowa native Bob Feller, a pitcher for the Cleveland Indians. Paige was signed to pitch for the Indians two years later, in 1948 — when he was 42 years old.