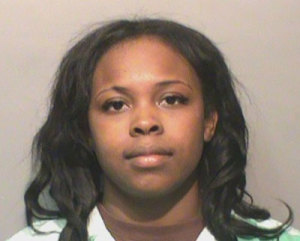 The mother of a 5-year-old girl who died last month in Des Moines is now behind bars. Des Moines Police Department spokesman Sergeant Jason Halifax says investigators had been waiting for the results of several tests. “The medical examiner completed an autopsy and the resulted indicated the child had lethal amounts of morphine in her system,” Halifax said.

Jayda Canada died on October 7. The child’s mother, 24-year-old Tionne Bloodshaw, is now facing a long list of charges. “She’s charged with child endangerment resulting in death and neglect of a dependent person. That was for another child who was home at the time and was exposed to narcotics,” Halifax said.

Police found cocaine, seven morphine pills, 81 ecstasy tablets, counterfeit bills and digital scales in the home. Bloodshaw is also facing eight drug charges. A man who Halifax referred to a Bloodshaw’s boyfriend is facing similar charges. He’s identified as Deshaun Trombone. “Bloodshaw had a no contact order against Trombone, however, she was allowing him into the house,” Halifax said. “He is not in custody right now. He is wanted for these charges and we are looking for him.”

Trombone was already on the Des Moines Police Department’s “most wanted list” before this incident. In addition to child endangerment and neglect charges, Trombone is facing charges for being a felon in possession of ammunition and for violating a no contact order.