You are here: Home / News / Winter weather advisory covers more than half the state 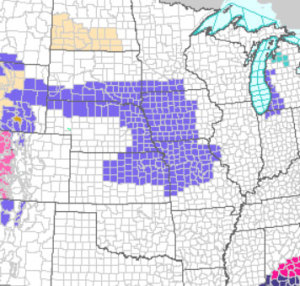 Areas under a winter weather advisory are shown in purple in this National Weather Service map.

With more than a month of fall left on the calendar, a winter storm is approaching Iowa that threatens to dump several inches of snow on the state Saturday. It’s already prompting doom-and-gloom predictions about how we may be facing one of the worst winters since the 1800s.

Meteorologist Jeff Zogg, at the National Weather Service, says to relax, for now, it’s not Snowmageddon. “Amounts will be relatively light, however, with it being our first snowfall, we’ll definitely have to be careful,” Zogg says. “We’re looking for amounts anywhere in the one-to-three inch range.”

Some areas of the state could see isolated pockets of four or more inches of snow, while temperatures will remain well below normal, with highs mostly in the 20s. Strong winds blowing around the light snow may impact visibility while roads across much of Iowa will likely be quite slick. Zogg says an advisory runs from 9 A.M. to 9 P.M. on Saturday.

“We do have a winter weather advisory covering basically the western two-thirds of Iowa,” Zogg says. “That is just to call attention to the wintery weather we’re expecting tomorrow. Again, accumulations should be fairly light but with it being the first system of the season, we just want people to be extra-careful when they’re out and about.”

A report attributed to the state climatologist indicates the last time Iowa had a cold spell this early during October and November was in 1991 — which led to the coldest November since 1880. Zogg says we don’t need to trade in our cars for dogs and sleds, not yet. “We have heard the speculation about that, however, our official outlook right now is still calling for equal chances for temperatures for the winter season,” Zogg says. “That means there’s no strong indication it would be above, near or below normal at this time.”

The long-range winter forecast for Iowa will be updated next Thursday. Keep up with the forecast at weather.gov.