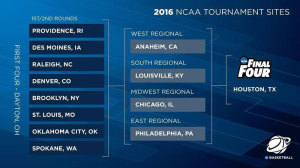 Des Moines has finally landed the NCAA men’s basketball tournament. The NCAA announced that Wells Fargo Arena will host first and second round games in 2016.

“It’s unreal, you know when we heard today that we got selected, it’s almost a feeling of joy and then numbness, so it’s amazing it really is,” Iowa Events Center general manager Chris Connolly says. “We’ve worked hard, we’ve bid before. We made a lot of adjustments since the last time we bid on NCAA men’s basketball first and second round and I think those adjustments paid off, “

Des Moines came up short in two other bids for the mens’ tournament. Connolly says many have asked why they didn’t win the bid before and he says it’s fierce competition, as evidenced by the places that have won the bids. “They are real, real good markets and good venues and we feel like we are in the mix and that’s why we continued to bid and finally we were successful,” Connally says.

Connolly says seating capacity was not an issue in their previous bids as it’s not a championship event like wrestling. He says they will be adding some seats to get over 16,500. And he says the rest of the items in the bid package also helped. Iowa State is serving as the host school.