You are here: Home / Health / Medicine / Effort continues to get more people to quit smoking 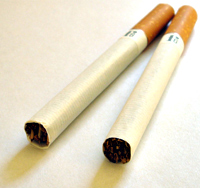 Many Iowans, who are smokers, may have this Thursday circled on their calendars. The third Thursday in November is the American Cancer Society’s Great American Smokeout — an annual effort to encourage smokers to quit for the day or make a plan to quit.

Peggy Huppert, with the American Cancer Society in Central Iowa, says in the early 1970s, more than 40-percent of adult Iowans smoked cigarettes or cigars. Today, that figure has dropped to 18-percent.

“We still think that’s too high,” Huppert said. “We have a lot of emphasis on helping people quit because of the harm that is caused. It is the number one preventable cause of death and disease in the nation and in Iowa.” Smoking is blamed for roughly 80-percent of all lung cancer cases in the U.S. and lung cancer is the leading cause of death among all forms of cancer.

Despite the extreme risks associated with smoking, thousands of Iowans have trouble quitting. “It’s extremely hard to quit smoking. Nicotine is the most addictive substance known to humans, more addictive than crack, meth, or any illegal drug,” Huppert said. “The average person has to try seven times to quit smoking before they’re successful.”

“Within 30 days of quitting, your health can improve significantly and it will add years to your life,” Huppert said. Persons who enroll in the Quitline Iowa program could be eligible for eight weeks of free nicotine replacement therapy, including patches, gum, or lozenges.