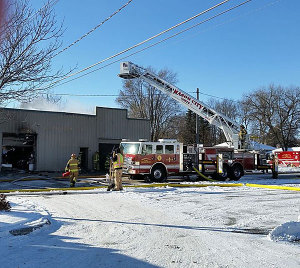 Firefighters on the scene in Mason City.

More than a dozen motorcycles were destroyed Monday in a fire at a Harley-Davidson dealership in Mason City. Crews were sent to the shop building, located behind the main dealership building, just before 7 a.m.

Mason City Fire Chief Bob Platts says fire was contained to the shop building. “There was some light smoke that made it into the newer, main building, but the goal here was to keep the fire confined to (the shop) building so it wouldn’t spread to the other one,” Platts said.

No one was injured in the fire and the motorcycles were fully insured. Platts said firefighters had to do battle with both the fire and Mother Nature, as the extreme cold combined with the water turned everything into a sheet of ice.

“We always seem to pick the cold days for these,” Platts said. “We tried to keep sand on the ground so the guys aren’t slipping around.” The cause of the fire remains under investigation.