You are here: Home / Education / Drake’s president to join blues legend on stage for birthday bash 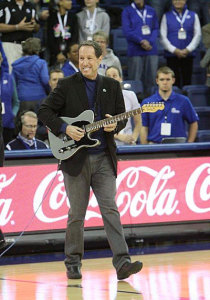 Drake University is throwing a 70th birthday party for its president and they’ve arranged for him to play his guitar with a blues legend. On Friday evening, December 5, guitarist John Hammond is performing a free concert on the Drake campus and Drake president David Maxwell will join Hammond on stage for the song “Found Love”.

This past weekend, Maxwell and his electric guitar were center court for a Drake men’s basketball game. Maxwell played the National Anthem. Maxwell’s father was a professional musician, a trumpeter. This past February Maxwell played a Johnny Cash standard at an event for the Des Moines West Side Chamber of Commerce.

Musician John Hammond is two years older than Maxwell and has been a recording artist for 50 years. Hammond began playing the guitar after listening to a Jimmy Reed album. The song Hammond and Drake’s president will team up on at the December concert was written by Jimmy Reed.