You are here: Home / Human Interest / Iowa hunters on pace to kill same amount of deer as last season (VIDEO) 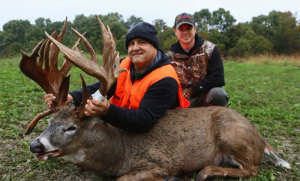 Last year, hunters in Iowa killed fewer than 100,000 deer for the first time since the mid-1990s. Jim Coffey, forest wildlife research technician for the Iowa Department of Natural Resources, says it’s possible hunters will harvest a similar number of deer this season. “We’re right on pace for where we were at this time last year with almost 24,000 deer being harvested so far,” Coffey says.

Only bow hunting of deer is allowed right now in Iowa and the bow hunting season is about halfway complete. The reported number of bucks taken this season has increased by 1,000 compared to last year, while the reported doe harvest is down 1,000. “That’s not too uncommon because of the way we’ve changed regulations this year, plus a lot of our bow hunters are out there seeking that buck,” Coffey says.

The number of deer killed by hunters in Iowa has declined for eight consecutive years. But, Coffey says hunters are still getting plenty of chances to fire their weapons. “We’ve been hearing good reports from our hunters. The deer have been active. The cold spell starting Sunday kind of slowed things down…but with the warm spell coming up this weekend and the rut going on, it’ll be a good weekend to be out,” Coffey says.

Iowa’s first shotgun deer hunting season begins on December 6, with the second shotgun season starting December 13. Most hunters are hoping to spot a big buck, but probably won’t see anything like the one shot just southeast of Des Moines back in October. “Probably the biggest buck that’s been talked about was the one in Marion County. That was shot fairly early in the season and has been creating quite a stir on the Internet,” Coffey said. That buck was shot with a muzzleloader by Joe Franz on his property. The website trophypursuit.com posted video of Franz’s hunt and claims the buck could be “the largest ever taken on professional video.”