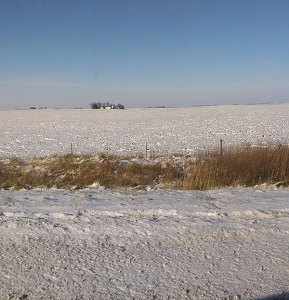 Frozen fields prevent applicators from injecting manure into the soil.

A later harvest and colder temperatures have caused some issues for livestock producers who would like to fertilize fields with manure. Iowa State University Extension Agronomist, Joel DeJong, says northwest Iowa livestock confinement barns have millions of gallons of liquid manure waiting for applicators to inject into the soil.

“But this freeze up we’ve had in the past week really kind of put an end to everything. We have facilities that probably won’t make it to spring. So, we’re hoping for a warm spell so we can get out there and inject more manure. Otherwise, we’re going to have to surface apply some of this manure so we don’t have facilities that are running over,” DeJong says.

Applying manure on the top of the ground raises more concerns about runoff and pollution. “Of course, they’re going to follow the precautions that they need with the setbacks from residences, definitely the setbacks from streams and rivers so that runoff doesn’t reach Iowa’s surface water,” DeJong says.

Iowa Pork Producers Association spokesman Ron Berkenholz doesn’t see it being a problem for producers. “No, we don’t believe it is at this point. Iowa law states that surface application of liquid manure from a confinement operation is prohibited on snow covered ground from December 21st — the first day of winter — to April first. And on frozen ground from February first to April first,” Berkenholz says. “So, right now, the ground is frozen, there’s snow on it, but they can still apply manure.”

The later harvest caused some back up in spreading the manure as the applicators had to wait until the crops were out to go to work. The state rules that prevent producers from spreading manure on frozen ground with the start of winter were instituted in 2010.