You are here: Home / Sports / Drake football team closes out the season in Florida 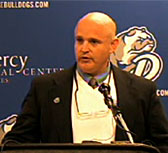 The Drake football team heads to Florida to close out the season on Saturday with a game against Stetson. The Bulldogs had their Pioneer Football League title hopes dashed three weeks ago on a late touchdown drive by San Diego but responded with a late touchdown to rally for a win at Dayton.

“To show that kind of resilience, especially after coming off a tough loss against San Diego…our guys hung in there, they kept fighting…and I was really, really proud of how our team responded,” Drake coach Rick Fox says.

The Bulldogs are motivated to end the season with a win as he says Drake football is playing together and playing with relentless effort. “And if we do that, one play at a time for an entire game, then good things are usually going to happen for us,” Fox says.

Stetson enters the game with a record of 5-6, but Fox says they led San Diego for a good portion of the game and he says any team in the conference is tough to beat at home.

Fox says the final game of any season is emotional for the seniors who are ending their careers. “Football is not like basketball or baseball or soccer where you can just pick it up and play it for many, many years. The nature of the sport brings a finality to it. So, it’s a special week, it’s an emotional week and we want to send these guys out in the right way on Saturday,” Fox says.