You are here: Home / Health / Medicine / Pharmacy Board delays decision on medical marijuana 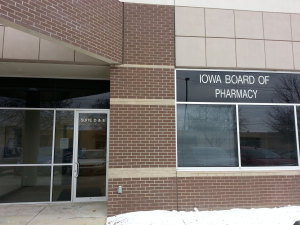 The Iowa Board of Pharmacy today tabled a recommendation that the Iowa Legislature reclassify marijuana. A three-member subcommittee had recommended the full board urge state lawmakers to make marijuana a “Schedule Two” substance, meaning it could be used for medical purposes.

Board Chairman Ed Maier is a pharmacist from Monona County. “I believe we decided to table it to have a little more time to think about it, primarily because of the fact that federal law and state law would be in conflict,” Maier said. Federal law classifies marijuana as Schedule One, which bans most uses of the drug.

Medical marijuana advocate Sally Gaer of West Des Moines said she doesn’t understand the decision to delay a decision, especially since the pharmacy board previously recommended reclassifying marijuana back in 2010. “I’m really disappointed,” Gaer said. “I don’t understand why they need another discussion on all of it. I’m just really frustrated.”

The board will return to the issue at its meeting on January 3. Gaer has a 24-year-old daughter who suffers from intractable epilepsy and is currently taking four different anticonvulsant drugs, including one that’s imported from France and isn’t approved for use by the Food and Drug Administration. “So, FDA approval doesn’t mean a ton to me at this point,” Gaer said. “All of her meds she’s been on have not been approved for use in children and she started on them as a child. We’re out of options for medications to try with her, so we would like to try the cannabidiol oil and whatever else might help her.”

Gaer helped lead the lobbying effort earlier this year that resulted in Governor Branstad signing a bill decriminalizing possession of cannabis oil as treatment for chronic epilepsy. But, Gaer notes most states where cannabis oil can be legally purchased also restrict sales to residents of that state. In addition, the ID cards that will protect epileptic patients in Iowa from prosecution if they’re caught with cannabis oil won’t be issued until January 30.

“I’m frustrated with the bill because in the final hours, everything was kind of sliced and diced out of it,” Gaer said. “The reciprocity for hurting Iowans who are refugees in Colorado…they can’t bring their loved ones home (to Iowa) to see their family and bring their medication with their children. That’s frustrating to me too.” Gaer and other parents of children with severe forms of epilepsy have been asking state lawmakers to allow marijuana to be grown here, so cannabis oil can be produced and purchased in Iowa.

Dale Woolery, Associate Director of the Iowa Office of Drug Control Policy, praised the cautious approach of the pharmacy board. “It’s not an easy thing. It tells us how difficult this issue really is,” Woolery said. “We don’t believe moving marijuana out of Schedule One is required to do some of the things that are being talked about, (such as) research and CBD (cannabidiol) access. It’s been demonstrated that can happen with marijuana as a Schedule One.”

While the pharmacy board recommended in 2010 that lawmakers reclassify marijuana, the legislature has not taken any action on the matter.