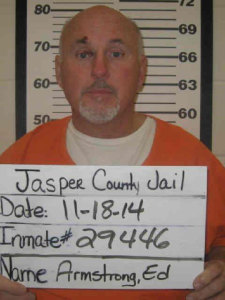 An alleged scam artist wanted in several states was arrested after an alert Newton man tipped off authorities.

A 54-year-old man wanted on warrants for running construction scams in five states was arrested in Newton yesterday after the Jasper County Sheriff’s office received a call from a local resident. The resident had responded to an ad in the local newspaper, contacting Ed Cross with Cross Construction about building a pole-type building on his property.

The resident became suspicious when Cross submitted a very low bid and requested a $7,000 deposit the same day. The home owner then discovered Cross was renting equipment from a local business under the name of Ed Armstrong.

The home owner did an internet search, discovered that Armstrong had a nationwide warrant for his arrest and then the home owner called the local sheriff’s department. Seventeen outstanding warrants have been issued for Armstrong by authorities in Kentucky, Illinois, Indiana, Oklahoma and Ohio. The Jasper County Sheriff’s Department found Armstrong, driving around in Newton, and arrested him. He’s in the Jasper County Jail, awaiting extradition.