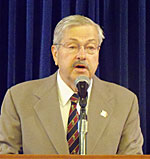 Governor Terry Branstad says he’s open to considering all options that might boost the amount of money available to fix Iowa’s roads and bridges.

“I’m interested in coming up with additional funding for the Road Use Tax Fund,” Branstad told Radio Iowa Wednesday afternoon, “and I want to look at a whole series of options and ideas.”

The state gas taxes paid when motorists fill up at Iowa pumps are deposited in the state’s Road Use Tax Fund, but transportation officials have said for the past several years there’s not enough money being generated from the gas tax to finance needed road and bridge repairs and new construction. It’s partly because modern vehicles get far better gas mileage — so fewer gallons of fuel are purchased — and partly because the state gas tax of 22 cents per gallon hasn’t been raised since 1989. Branstad said he isn’t calling on legislators to pass an increase in the state gas tax. Branstad suggested a wide-ranging combination of actions should be considered.

One idea floated last year would be to charge the state sales tax on fuel purchases. One of the complications lawmakers are considering is that drivers of new hybrid vehicles which primarily run on electricity pay little, if anything, for using the roads compared to those who pay the gas tax when they fill up.

“I really believe that we need a more modern and efficient system,” Branstad said, “and I also want to do something that will maybe give some option opportunities to local governments as well.”

Branstad wants to explore giving cities and counties that receive a combination of state and federal dollars to finance road projects a way to opt out of Davis-Bacon restrictions. Those federal rules require federally financed projects to pay construction workers the prevailing wage in the county. Republicans say that unnecessarily inflates the cost of projects and benefits construction firms that employ union labor, while Democrats have traditionally opposed efforts to do away with prevailing wage rules.

Iowa cities and counties already get a share of state gas tax revenue, but local officials have complained it’s not a large enough share based on the number of miles of city streets and county roads when compared to the number of miles of state-maintained highways. Some areas of the state with pressing needs have resorted to asking voters to raise their property taxes to finance local road and bridge projects. Branstad said he’s talked with leaders from both parties to see if there’s some way to come up with a “bipartisan consensus” among legislators this year, compared to previous years when no agreement emerged.