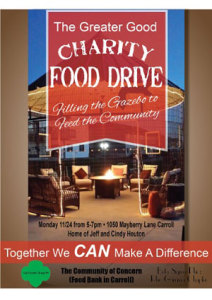 A corn crib that’s caused some controversy in the western Iowa town of Carroll is being put to good use today. The corn crib is being used by a couple in town as a backyard gazebo. Several neighbors have complained about the wire and metal structure, calling it an eyesore.

This evening, Carroll residents are being challenged to fill the corn crib with canned food to be donated to the local Food Bank. Summer Parrott helped organize the food donation drive.

“Carroll is community where we help our neighbors and I really just wanted to bring everything together so we could focus on something positive during the holiday season,” Parrott said. A Girl Scout group that Parrott teaches will help collect the donations.

Parrott said she was bothered by the negativity that seemed to be swirling around the community over the gazebo issue. “When I first read the news story about what was going on with the gazebo, I just immediately thought this is such a first world issue,” Parrott said. “There are so many bigger things to be worried about within the community, let alone the world, that we don’t need to keep perpetuating all of the negativity going back and forth.”

Parrott said the owners of the corn crib/gazebo, Jeff and Cindy Heuton, were quick to agree to the food drive idea when she approached them about the idea of filling the structure with canned goods. Anyone who wants to donate to the effort is asked to drop off canned food between 5-7 p.m. at 1050 Mayberry Lane in Carroll.