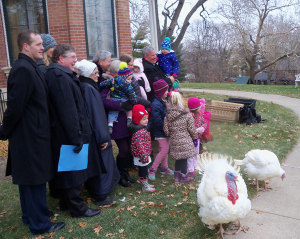 Noel Thompson raised the two turkeys at Circle Hill Farms in Elsworth, and says students at West Marshall elementary school chose the names for the birds. The male turkey is called Cranberry, which Thompson attributes in part to its appearance.

“His waddle maybe resembles cranberries just a little bit. And we called our hen here Cinnamon, because like so many times in life, women add a lot of spice to life,” Thompson says. The governor was joined by First Lady Chris Branstad and their grandchildren for the annual tradition. He says Iowa is a key turkey producer.

“This is a good lean high-protein nutritious food, and of course we all look forward to celebrating Thanksgiving with a turkey,” Branstad says.

The governor read a proclamation sparing the two birds from being the main attraction at a Thursday dinner. “Now therefore, I Terry E. Branstad, governor of the State of Iowa do herby proclaim Cinnamon the turkey and Cranberry the turkey, free from the harm of the carving knives and gravy for this Thanksgiving,” Branstad says. “They’re going to living history farms.”

The turkeys stood patiently as Branstad’s grandkids petted them and then the group was joined by Thompson and state Ag Secretary Bill Northey for a picture. Branstad’s grandkids were saying “turkey, turkey” and “turkey pardoning” as they posed for the picture and the turkeys played along by gobbling for the grandkids.

Audio: Governor’s grandkids and the turkeys.

Thompson says 11-million turkeys are raised annually in Iowa, with the majority going to processing plants in Storm Lake and West Liberty where they are processed into sandwich meat.

“And most of those you will find people having for lunch every day of the week,” Thompson says. Thompson, who is president of the Iowa Turkey Federation,  says turkey prices have dropped a little this year as the cost of production has dropped along with grain prices. He says about 60-percent of the

cost of raising turkeys is for the feed. There are approximately 130 turkey farmers in the state.