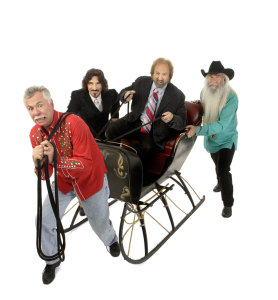 One of the most successful and longest-running country music acts will be making two stops in Iowa this week. The Oak Ridge Boys are marking their 25th annual Christmas tour in their 41st year as a band.

Bass singer Richard Sterban says the show is divided into two sections, the first being a rundown of the songs that have made them so famous for decades.

During the holiday half of the show, the four band members will have a seat in four rocking chairs arranged in front of a fireplace in what Sterban says has become a fan favorite.

“Basically, we take turns talking about childhood Christmas memories and what Christmas means to the four of us,” Sterban says. “It’s really a chance for the audience to get to know the four Oak Ridge Boys better. It’s a great down-home segment. We sing some traditional Christmas carols and we encourage the audience to sing along with us.”

Sterban became famous for his “oom-papa-oom-papa-mau-mau” bass solo in the single “Elvira.” It became the band’s fourth number-one country hit, reached number-five on the pop charts and won the group a Grammy award.

The Oak Ridge Boys are playing Friday in Des Moines and Saturday in Dubuque. They’ll be back in Iowa next month for a show in Tama on December 19th.