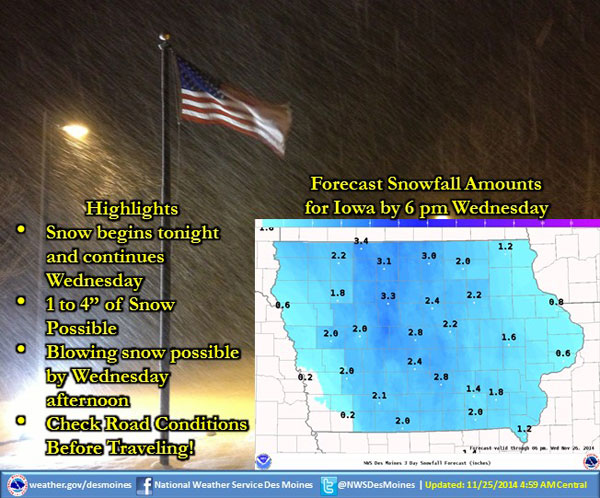 Many Iowans may need to schedule their Thanksgiving holiday travel plans around those of Mother Nature. National Weather Service Meteorologist Kurt Kotenberg says 1 to 4 inches of snow is expected across the state tonight into tomorrow morning.

“Most of the snow is going to be in northern and north-central Iowa,” Kotenberg said. “So, we’re looking at maybe 3 to 4 inches of snow from around the Estherville area, along Interstate 35, north of Ames.”

Much of central Iowa, south of Ames, can expect two to three inches of snow. Western and eastern Iowa are forecast to receive around an inch of snow.

The snow may present some challenges for motorists. “I think by 7 a.m., a good part of central Iowa will probably have around one to two inches of snow already fallen,” Kotenberg said. “That means by the time a lot of us head out Wednesday morning, those roadways might already be snow covered and a little bit slippery.”

The snow will be followed by a big blast of cold air. “Wind speeds will pick up behind this. We’ll probably see winds of around 15 to 20 miles an hour Wednesday night into Thursday morning,” Kotenberg said. Some blowing snow is possible on Wednesday. High temperatures on Wednesday will range from the upper 20s to mid 30s, with overnight lows dipping into the single digits.. Highs on Thursday are expected in the teens and 20s.