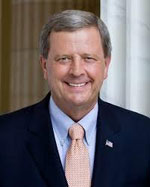 After two decades as a member of the U.S. House of Representatives, Republican Tom Latham will soon enter retirement — sort of. Latham announced almost a year ago that he would not seek reelection in 2014 and sometime this month he’ll take his final vote as a member of congress.

“I don’t know yet what’s in store for us,” Latham said during an interview with Radio Iowa. “I’ve been talking with different folks about different opportunities. I want to stay involved. I want to be able to continue to contribute, in a different form, but there may be some opportunities to help the state of Iowa and do some good things in the future, but I’m also not going to do anything full-time.”

“If you remember back in 1993 there was a huge, retroactive tax increase that the Clinton Administration enacted,” Latham said. “There was the ‘Hillary Health Care Act’ which was a big scare to a lot of people in small business, like my family business.”

Latham’s father founded Latham Seeds in 1947, which remains a family owned enterprise, based in Latham’s hometown of Alexander, Iowa. Latham was a member of the Iowa Republican Party’s state central committee, the GOP’s governing board, in 1993 when then-Congressman Fred Grandy, a fellow Republican, announced he was challenging Governor Terry Branstad’s bid for reelection. It meant the House seat in the district in which Latham lived was open in 1994.

“I was very strongly motivated to try and come to Washington to make a difference and represent the district and see if we could enact positive changes in a conservative manner,” Latham said.

Latham was part of a Republican wave in 1994 that put Republicans in charge of the U.S. House for the first time in four decades.

“We had three years of balanced budgets, lowered some taxes and did some things that I think were very, very positive,” Latham said. “Some of the frustration we have today in Washington is that I don’t think that there’s that possibility of compromise, maybe, that we had with President Clinton and a Republican-controlled congress.”

Ohio Republican John Boener — the current speaker of the House — was also elected in 1994, The two have become best friends — they’re both smokers — and they eat together almost every night congress is in session. Their friendship has likely endured and flourished because Latham doesn’t talk about it publicly or use it as political currency.

“You know, I don’t know exactly what the future’s going to hold, whether I do some work yet in Washington, but I would expect that I’ve got some colleagues in congress that, if I’m in town, I’m going to be able to go have dinner with and visit with,” Latham said.

“I believe it’s just over 60 of the counties of the state that I’ve represented in the 20 years,” Latham said.

Latham is currently the only Iowan on the House Appropriations Committee and he has helped steer federal investment in some key Iowa projects over the years.

“The thing I’m probably most proud of — it’s the largest project ever attempted by the United States Department of Agriculture, was the Animal Health Center up at Ames,” Latham said. “…That was $462 million as far as the remodeling and refurbishing and rebuilding,”

And it took six years to get congressional approval for all facets of the project. Latham also helped secure $40 million for Sioux City’s Airport, to help the Iowa Air Guard’s unit there make the transition from flying F16 fighter jets to flying planes that refuel other military planes in midair.

“When you’re in Washington, you’re extremely busy. When you’re home, you’re not home because you’re out in the district all the time and that’s one of the reasons I decided to retire,” Latham said. “…I thought it was time to actually refocus and start a new chapter in my life.”

Twelve years ago Latham and his wife, Kathy, moved from Alexander to Ames, then four years ago they moved to Clive — all moves related to Latham’s service in congress. He’s planning to stay put now.

“I’ve got five grandchildren and I look forward to being a grandpa and taking grandma around for a while,” Latham said, laughing.