You are here: Home / News / State Representative from Hull dies after battle with cancer 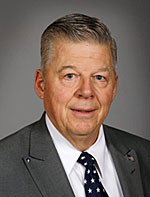 State Representative Dwayne Alons, a Republican from Hull, died Saturday. Alons was 68 years old and had announced in early October that he had been diagnosed with cancer of the left kidney.

Iowa Republican Party co-chairman Cody Hoefert of Rock Rapids talked about the death of Alons. “Representative Alons was a tireless advocate for family policy, family values and conservative values, throughout his time as a public servant in Iowa. Beginning with his time serving in the military, as well as his time –17 years — serving in the Iowa House,” Hoefert says.

Alons was first elected in 1998. He was a farmer and retired Iowa Air National Guard Brigadier General. “He will be greatly missed, him and his wife Clarice’s time and service to the state of Iowa is a tribute to their sacrifice for our state and our country,” Hoefert says.

According to the Iowa House Republicans web page, Alons attended the elementary school system in Boyden. He graduated from Boyden-Hull High School in 1964. Following high school, he graduated from Northwestern College in Orange City and received his Master’s degree from the University of Arkansas.

In 1967, Alons married Clarice and together they have four children, Kevin, Kyle, Kristin, and Karena. They have 13 grandchildren. Alons won re-election to his ninth term in the Iowa House in the November General Election. He ran unopposed.

Funeral arrangements are pending with the Oolman Funeral Home in Hull.