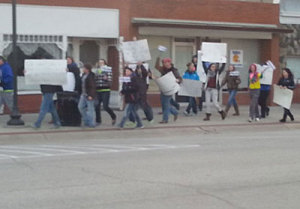 Some students protested Wednesday after a vote to reorganize the Hamburg and Farragut school districts failed by 7 votes.

Two southwest Iowa school districts face uncertain futures following the rejection of a reorganization referendum in Tuesday’s special election. Voters in the Farragut School District overwhelmingly approved a referendum to reorganize with Hamburg’s district into the Nishnabotna School District. But, the measure failed by only a 7-vote margin in Hamburg.

Hamburg Superintendent Terry Kenealy believes an anti-Farragut sentiment led to his district rejecting reorganization. “In Hamburg there’s definitely and attitude, a feeling, that’s anti-Farragut. It goes back to, with some folks that I talked to, they felt like the whole-grade sharing was shoved down their throats so to speak. They we’re going to do it and here it is,” Kenealy says.

Kenealy also said some Hamburg voters felt high school students should be based in their community, not in Farragut, under the current whole sharing agreement.

Farragut Superintendent Tom Hinrichs agrees the concerns over the building configurations was a factor in the referendum’s defeat. “As we had public forums and advisory committee meetings and combined board meetings — that was the big thing we couldn’t agree on. So, it’s not surprising that that was probably the deciding issue in the election,” Hinrichs says. Iowa Department of Education officials have hinted at a possible dissolution of both districts if the reorganization vote failed.

Hinrichs says some voters may’ve thought that state education officials were bluffing. “If it was a scare tactic, it worked. I am maybe not scared, but pretty apprehensive now that we can’t put what I thought was our best foot forward,” Hinrichs says. “Now we have to go to the SBRC (School Budget Review Committee) with plan B, and how receptive they’ll be to plan B is anybody’s guess.”

With the reorganization referendum’s defeat, Kenealy says both districts must beginning planning for next school year–assuming there will be a school year. “Both boards are going to have to sit down and roll up their sleeves and make some pretty difficult decisions, because we still have the issue before the SBRC this hasn’t made those go away, it’s actually made the mountain we have to climb a little steeper. Both districts face hearings before the School Budget Review Committee January 21st to discuss previously-submitted plans for reducing negative unspent balances, and to request more spending authority from the state.

A state education board decision on the fate of both districts is expected no later than March. About 25 students protested the consolidation vote’s rejection, and support for Nishnabotna schools, in Hamburg Wednesday morning.