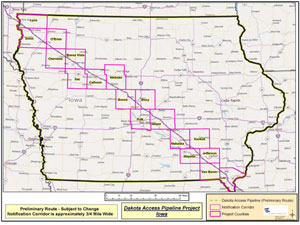 This Energy Transfer Partners map shows the proposed route of the oil pipeline.

There continues to be no lack of input on the proposed oil pipeline from the North Dakota oil fields that would cross South Dakota and Iowa into Illinois. Energy Transfer Partners of Dallas, Texas, has been holding a series of meetings explaining their project. Residents of Lee County had many questions about the safety of the pipeline and some said they are against it and won’t cooperate.

Peter Van Kley farms in Sioux County near Alton in northwest Iowa and attended a pipeline meeting in Sioux Center. He sees the project as positive for the area and for economic development.

While many have expressed concern about breaks or issues with the pipeline, Van Kley believes the pipeline is better way to move the oil. “I’d rather have that oil flowing through a pipeline, than (being transported on) trains and trucks,” he says. The Bakken oil that would move through the pipeline is more volatile than other oil and accidents with trains have caused fires and deaths.

Van Kley is confident after hearing from Energy Transfer Partners they will be environmentally responsible and put the topsoil back in place after building the pipeline. He says they have also said they will make sure they take care when crossing tile lines, and he says they are planning to pay up to three years of damages for crops that are taken out to build the pipeline. Van Kley says it looks like part of the pipeline will cross some of his land which his relatives homesteaded in 1876.

Jeff Rehder, farms near Hawarden in Sioux County. He says the pipeline would benefit farmers by freeing up the rail cars that are now used to haul the oil. “The oil companies seem to have some extra money and outbid the grain farmers and coal industry as far as getting rail access,” Rehder says. “I think steady pipelines take a lot of pressure off the rail which indirectly helps our electric costs as well as a better basis for our grain farmers.”

Rehder believes there is pressure on the company to ensure the pipeline is safe. “The oil industry does not want any black eyes, they have the extra revenues, I think they are going to build it right and work with every individual farmer as the best they can,” Rehder says. “I think a pipeline is a much safer avenue than having rail cars up and down the roads carrying oil. We’ve had a few more rail accidents lately than there has been in the past. The pipeline at least is out-of-sight out-of-mind.”

Rehder says Energy Transfer Partners appears to have enough high technology that they’ll be able to detect any leaks that might occur. The company held information meetings on the pipeline this week in several of the affected counties.