You are here: Home / Health / Medicine / Parents rally for more help in dealing with mental illness 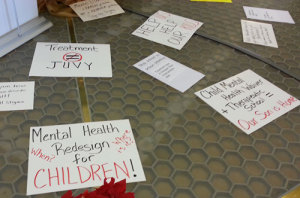 Signs used during rally at the statehouse.

Parents of children suffering from mental illness rallied at the Statehouse Wednesday.

Tammy Nyden of Iowa City is chairperson of a statewide children’s mental health committee of the National Alliance on Mental Illness. “There are so many services that do not exist in Iowa and without them, our children are not safe to themselves and sometimes to others,” Nyden said.

State legislators last year approved $6 million for the Iowa Department of Human Services to help some 9,000 Iowans with mental and physical disabilities who are on waiting lists for services. Nyden said while she’s grateful for the funding, it’s made little difference.

“It was honestly too little, too late,” Nyden said. “The year before, $8.7 million was vetoed and neither of those amounts would have paid down the waiting list. The $6 million…we have found out, halfway in to this fiscal year, very little, if any of it has been applied. If it were fully applied to the waiting list, it would only be reduced some 20-percent.” 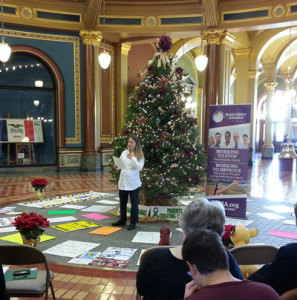 A spokesperson for the DHS said the agency will be ramping up their efforts soon the speed up access to services for Iowans with mental illnesses. Nyden has a 12-year-old son who has been on a waiting list for services for two years.

One problem with improving services, according to Nyden, is the general public’s lack of understanding of mental illnesses. She said many people are afraid to speak with her about the subject or blame parents for the child’s condition.

“Many of these children do have mental illness from trauma, but many of them were simply born with a brain disorder, like my son,” Nyden said. “You’re born with Tourette’s syndrome, he didn’t do anything to deserve what he has to live through every day.” Around 30 people gathered for Wednesday’s rally at the Statehouse in Des Moines.