You are here: Home / Sports / Cyclones race out early, down Arkansas 95-77 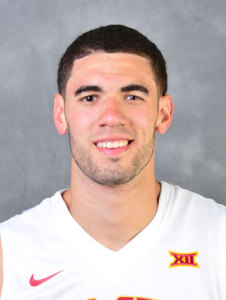 Iowa State raced away to a 20 point halftime lead and coasted to a 95-77 win over 18th ranked Arkansas in the SEC/Big 12 Challenge in Ames. Bryce De Jean-Jones led the Cyclones with 27 points while Georges Niang added 26.

“That’s as good a start as we’ve had in awhile and that was the key coming into this game, we wanted to get off to a good start,” ISU coach Fred Hoiberg said The Cyclones wanted to attack the Arkansas pressure defense. Hoiberg says with all the traps in the backcourt you have to come down and attack as you can’t run a traditional offense. He said you have to be ready to move the ball when they come to trap and they were able to do that.

Hoiberg said the Cyclones did a good job of limiting easy baskets for Arkansas by not turning the ball over and limiting their offensive rebounds.

Iowa State scorched the nets for 64 percent shooting, including 10 of 19 from three point range.