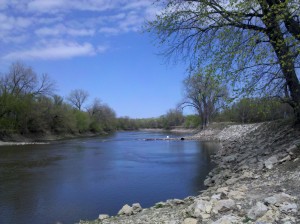 The leader of the Iowa Farm Bureau says record number of conservation practices have been put into place in the last two years, and says they will continue to push for more. Craig Hill says that’s something that should be looked at when gauging the efforts of farmers to improve the water quality in the state.

“The progress that we want to measure is how many structures are built every year, how much water is retained in building new ponds and terraces, how much erosion can be controlled. We can measure with the investment that we’re making every day, and that investment is growing. Farmers are investing more and more each and every day in conservation and water quality,” Hill says.

Hill says the progress has to be viewed in the long term. “If you’re looking to go to the water body or downriver and take a sample on a single day and make an assessment, an assumption off of that, I think it’s going to be difficult,” Hill says. “It’s going to be years and years, and it has been, we’re making progress.”

Nitrate levels have been higher than normal this fall in the Raccoon and Des Moines rivers. The CEO of the Des Moines Waterworks has said the organization is considering a lawsuit against the state over the nitrate levels in the water. Hill says the facility’ own numbers show there’s improvement.

The Farm Bureau leader says farming practices today have changed dramatically from what they were in the 1960’s and 70’s. “No till, cover crops, nitrogen stabilization….spoon-feeding the plant rather than broadcast, we’re making accurate assumptions about what the plant needs to grow and putting just the right amount of fertilizer on,” Hill says. “We’re doing good things and will continue to do that, but you are not going to go to the river and take one sample some day and say ‘ah, this has all been for naught.’ That method will just not be successful.”

Hill says nitrates were in the soil before the settlers came to Iowa and will continue to be in the soil as they are naturally occurring. “Methemoglobinemia, blue baby syndrome, the malady that we’re concerned when we set this ten parts per billion threshold (of nitrates), was something settlers dealt with before we had commercial fertilizer. This has been around a long time. So, we have to learn to manage these naturally occurring elements the best we can.”

He says soil erosion also happens naturally and it won’t ever completely go away. Hill says farmers will continue their efforts to protect the waters they best they can, as everyone wants clean water.

“We won’t be ever delivering a pure clear water stream through a river in Iowa, we’re just not made that way,” Hill says. “Maybe on a Rock Mountain slope you can get that with some snowmelt, but not in Iowa.” Hill made his comments in Des Moines at the Iowa Farm Bureau annual meeting.